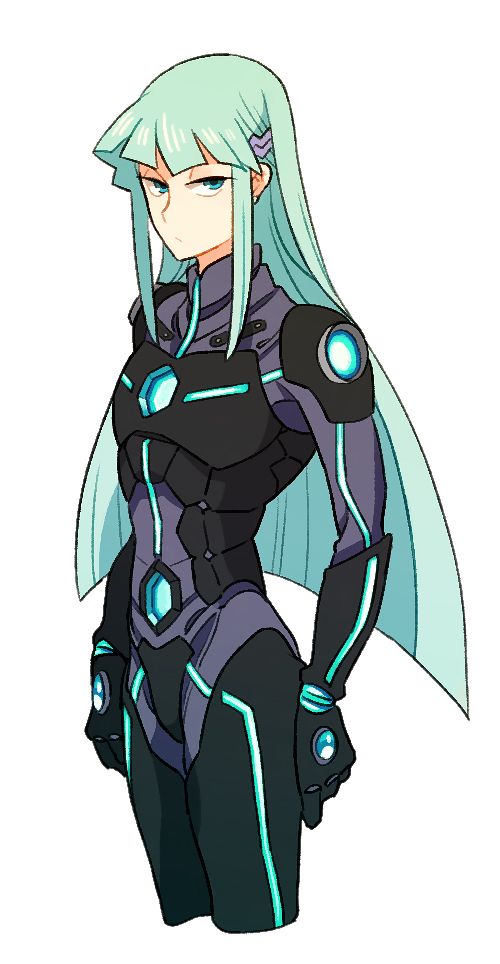 It was the day after that Niko came. He was holding hands with a person. "This is the offspring from when you had sex with me in the X-frame. Once again, even though it is a halfbreed, it is immensely powerful." It certainly broke the AEP unit mold. In its base form it had long turquoise hair and blue eyes. It was pretty androgenous, and its armored plating had glowing lines running along its lanky body. It also looked incurably bored to see me. I was used to not being liked. Probably even they had a negative opinion. It was still my child however. He was not aggressive towards me like the others were at first. When I asked them to adopt a human form, they surprised me. They bulked up into a decidedly male form. He was a blue haired hunk with a boob windowed crop top and white pants. He was a total himbo jock. "He has intact human organs. I don't need to explain his genitals now, do I? One other thing he has is a set of lungs. This requires him to be able to breathe air unlike pure AEP units." I doubted he would be underwater or in space. "I'll name you Chase." I told them both.

When Niko narrowed his eyes, I knew something was up. "I will be keeping him for Re:Birth Clan. You have several full AEP units in your clan already." I sucked my teeth and kicked at the ground. I thought he was here to give him to me like Keith did. "So, you just came here to gloat. That's fine. It was nice meeting you." I said with gritted teeth. He then smiled and said "I love how agreeable you are." I shrugged and replied "I do actually care about you and Keith. I wish you would see that." He just looked at me. "I don't think that my pair bond should be with a human." I rolled my eyes. "Whatever. Don't push your luck. Your clan is still a long way off." I then leaned over and told him about Radioactive Clan in a whispered tone. He smiled and asked if it was my turn to gloat. I chuckled. My son looked at me with a small grin of his own. I bet his advanced hearing allowed him to hear me as clear as if I yelled it out loud. "I guess it is. You can meet them if you want. They are downstairs in the X-frames." I told them. We went down together. I told Chase about the AEP lab. He went further down.

The foreigners were neutral to Niko. They were more concerned with their own mission. However, their mission entailed them just ambling around down here until it was time to spawn the new units. The whole point of him being here was networking. Niko was able to get on their good side. If he could secure an alliance, it would be really good for him. An alarm went off and a voice said there was a fight in the AEP lab. Niko and I ran to the elevator to get us down there. I hoped that it was just a fluke. That was very unlikely though. I had never heard this alarm before. When we got there, Chase was pinning down 06-001. I got over to them first. "Release him at once." Niko commanded. Chase looked at us and then down at his enemy. He did not let go. "06-001 was berating me for being a 'filthy halfbreed'. I looked at them. "Get your filthy spawnling off of me, Brianne." "Who threw the first punch here?" I asked. Chase looked away from me. "Let him go, Chase. Violence is not the answer here. Showing off good work and living well is the best revenge for these types." I said. 06-001 lunged.