Driving, 06660 had me talk about it. I gave him the basics. "Looks like we will be brought into conflict if we continue interacting with you." 04112 said. I rolled my eyes. It was really annoying. "Hey. I was fine in my clan. You had to resurrect a dead one with our help. Just stay out the way of any AEP units you see." "And what if they get you?" 02786 challenged. I sighed as I turned to face them. "As you might have saw since they were so inept, the AEP units of most clans are pretty green when it comes to field work. As long as they don't have their handler around and you can preempt an assault, you can run circles around them tacitly." I looked at Dylan. "But not you guys. Just listen to you clanmates for instructions if things get too confusing." Dylan just glared at me. "I'm not stupid." he spat. "Is that why that AEP unit on the motor bike came to talk to you?" 06660 asked. I nodded. "It was his second attempt to snipe me on that road. Like I said, they are not creative. If you survive the shot, he just comes out to see what's wrong. I was with other AEP units, so he got cold feet." I explained.

Eventually we got to another pitstop. Paul called us and said he had to use the bathroom. I groaned and said "Are you serious! We have a job." "It's not going anywhere in the time it takes for a piss break." he snapped back. It was true. When we pulled over, Paul shimmied on over to the restroom. I was waiting around for 10 minutes when I realized he had not come back yet. I wondered what could be taking so long. I looked at the passengers in my car. They were content to wait longer. Nothing that could be wrong had even crossed their minds. "I'm going to check on Paul. He's holding us up." I said annoyed as I opened the door. They nodded. I could only think of 2 things that could be holding him up in a dirty public rest stop. Neither one I really wanted to think about. When I got to the door, I opened it. "Paul! Either you're having the serious shits or fucking either way, you're messing with the schedule. Come on already!" I called out. I heard the distinct sound of slapping of flesh against flesh echo as I stepped in. I groaned. "I'll be out in a minute. Maybe 5!" he called out from the back.

Furious for some reason I stomped all the way over to the back of the restroom. It was a handicap bathroom. I wondered why I was so angry. It was not that I was that jealous. I had lots of time and partners for sex. It had to be that he was getting ass without telling anyone. That was what I was going with at the very least. I kicked down the stall door. He was fucking an AEP unit. It was holding the railing for wheelchair bound users. Paul was balls deep. "What the fuck are you doing, Paul!? You said you had to take a piss break. You know I have a bounty. We can't be out in the open!" I hissed. The AEP unit looked at me and hissed. "Die already! The kiss should have got you by now!" he said as he looked back at Paul again. "I'm nowhere near done. You're going to be here for a while." Paul said. I raised an eyebrow. I was obviously missing something crucial and demanded an explanation. The pair looked at each other. Apparently, he was pissing when he was ambushed by the Toxic AEP. He kissed a surprised Paul and forced him to ingest its special poison after fighting around the sink. 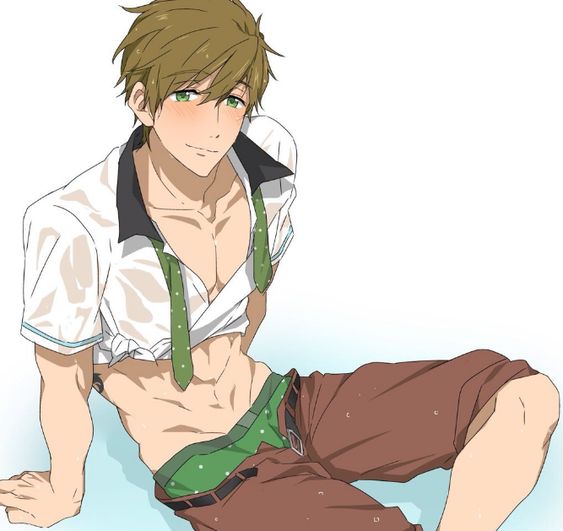 Good. It explained why they were both soaking wet. The poison that was drank attacked all vital organs at once. It was both very deadly and an aphrodisiac. The AEP unit offered to be Paul's last fuck. Since Paul was a big and powerful Devil, he was essentially immortal. He could just give himself more and more health that the poison could take. I doubted that even a single HP was gone. After 3 minutes and a soft grunt, Paul pulled out and came on the cyborg's face and chest as he pushed them to the ground. The Toxic AEP just looked up at us with a smile. "It's fine if you get rough. I know that you're sad and scared to die. It's not my first time doing this." he said to us pleasantly. He simply did not get the situation he was in. "Well, we need his body with us. Can you let us go!?" I asked with a deep sigh. He got up and walked over to me. "All the humans of your clan have a big bounty. I want it all. Let me kiss you." "If you will let us go, then yes." I told him. He pulled me in and looked very suave. He kissed me gently and then put his tongue in my mouth. I felt some slide down my throat.